How Should I Be Saving: RRSP, TFSA, or Other? 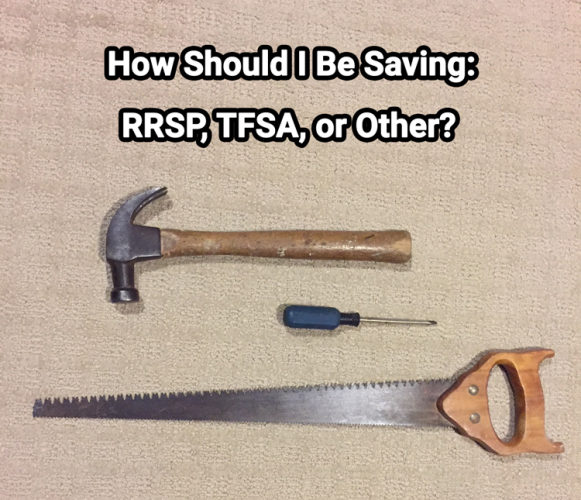 It's Saving Season: Should you do an RSP, a TFSA, a combination of the two or something else?

February's the time when many people focus on putting away money for the future. The big February savings started when RRSPs were developed. People would put money into their RSP by the end of February [or sometimes March 1] in order to get a tax deduction. It's great to have a deadline to get people to take action but the question is: what should you really be doing with your savings? Which strategy will maximize the efficiency of your money providing you with the most income in the future? The answer is: it depends.

The key thing to remember about RRSP's (RSP for short) is that RSP's are not a tax savings. RSP's are a tax deferral. That's just a fancy way of saying that it's a tax postponement. Whether this is a good idea for you or not is dependent on a few basic questions:

Generally people who haven't saved very much money will be in a lower tax bracket in the future, and an RSP may be the answer; but if you have been diligently putting money away into your RSP, we need to do a calculation to see, [based on assumptions], whether you will possibly be in a higher tax bracket at retirement, even if tax brackets stay the same. If so, adding to the RSP may not be for you. Also, if you don't have much time for the money to grow, due to the compounding effect of money, you may just get your contributions back. There may be other options than RRSP or TFSA. Please contact Julie Kranitz for more information.

If you are in a higher tax bracket at retirement than when you put the money into your RSP, you've definitely lost the game and the government has won! That's because you postponed tax at a lower rate only to pay a higher rate when you take the money out. This is almost always the case when kids right out of school start doing RSP's (since their income tends to increase as they get older); thereby, making it preferential for them to focus on tax-free savings accounts or other options rather than RSP's at the beginning of their careers.

When putting money in a tax-free savings account, you don't get any tax advantages on your tax return, but when you take the money out, you don't pay any tax. This is preferential if you are in a lower tax bracket when you put the money in, and will be in a higher tax bracket when you take the money out. Nevertheless, would it surprise you to know that there are options other than a tax-free savings account that might fit your situation? One that could give you less volatility and additional benefits.

The bottom line is whether an RSP or tax-free savings account is best for you depends on many factors. Many of which you cannot control: such as what the tax brackets will be when you retire since that is the government's decision. Even if tax brackets stay the same I can tell you that clients often forget when they look at their statements that their account doesn't totally belong to them. At least 20% (or more) of that account belongs to their silent partner… the government, and that will decrease their income at retirement. Even though clients know the taxes are due when they pull the money out of the RRSP, most people forget to factor this in when they look at their statements.
Here's a little story that might expand your thinking on RSP's.

Sam was a hard worker who had a good job. Unfortunately he lost his job and needed to borrow some money to carry him and his family until he found a new job. Mr. business-man told him: I can definitely give you a loan. I don't need the money right now so I will definitely loan you the money. But when I need the money back, at that point in time, whenever that may be, I will tell you that you need to pay me back, and I will also tell you what interest rate I have charged you over the period.

The question is would you cash that cheque and take that loan? Most people say no. And yet with an RSP we postpone paying the tax to a future date that is undisclosed [because the government can play with when you need to start taking income and paying the tax] and the tax rate is also undisclosed since we know that at any time the government can increase income taxes.

None of this is telling you that you should or should not do an RSP, it's just things to think about. There is nothing inherently good or bad about a saw, a hammer or a screwdriver; each one has their place. The bottom line is that you should never put money blindly into any investment without continually re-evaluating whether it is the best alternative for you.

If you are a client you can rest assured that we've evaluated this for you before making recommendations. Client or not, give us a call if you have questions as to whether you should be using an RSP, tax-free savings account, a combination of the two or perhaps another strategy. Our goal is to Maximize Your Wealth, in whatever form that is.

Maximizing your wealth to Maximize your life!

Julie Kranitz-Andrade is a certified financial planner at Wealth Maximization Group/FundEX Investments Inc. She can be reached at (905) 830-0022.